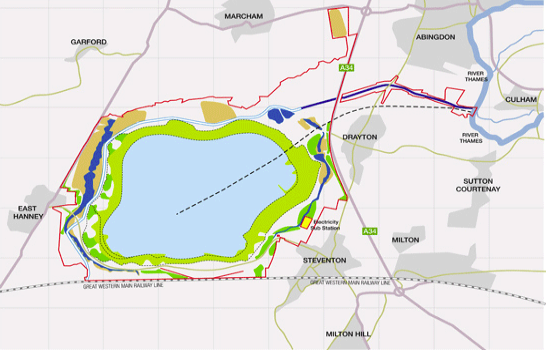 The long-running saga surrounding a ‘mega reservoir’ continues after it was confirmed land is still being set aside for the project despite years of opposition.

In the Vale of White Horse local plan part two, the council has set aside around 2,000 hectares of land for a reservoir between East Hanney, Abingdon and Steventon, on the same site which Thames Water attempted to get Government permission to build a reservoir in 2010, but was refused.

The plan, which was published for consultation on March 9, has led to objections from campaign groups, who believe that the reservoir would be detrimental for the environment and would lead to habitat destruction.

The Group Against Reservoir Development (GARD), highlighted studies in 2010 which showed that the proposals for the reservoir would create ‘great environmental damage and habitat destruction’ on and around the reservoir site.

Nick Thompson, the chairman of GARD at the time, said: “Thames Water’s plan for a massive reservoir would destroy vital habitat for some of our best loved wildlife.

“In addition to being very high quality productive farmland which is protected by national planning policy, the site is home to wildlife which should also be protected from the threat of development for the benefit of future generations.

“The proposal for the reservoir is based on artificially inflated demand projections, and it is not necessary.”

The initial £1bn proposal for the reservoir between Abingdon, East Hanney and Steventon was rejected by Government the same year.

But in 2014, the plans resurfaced when Thames Water announced it was still investigating the case.

In December 2016, GARD released a statement saying that if, in 2018, Thames Water’s final plan still features the reservoir, that they would demand a public enquiry.

Speaking to The Oxford Paper on Tuesday, Derek Stork, honorary chair of GARD, said: “The forecasted water shortages for the future are overwhelmingly (more than 90 per cent) driven by the needs of the London area, and it is unacceptable that Oxfordshire’s communities should be blighted for this.”

He added that the group “will continue to oppose Thames Water’s plans for the reservoir and are seeking the support of local councils, MPs, OFWAT and the Environment Agency for views”.

On Tuesday, CPRE (Campaign to Protect Rural England) Oxfordshire trustee and water advisor Professor Richard Harding said: “The proposed reservoir would be colossal and have a devastating impact on the environment and local communities as well as losing valuable farmland.

“At this point, we do not see good evidence to justify such a scheme.”

A spokesperson for the Vale said: “Thames Water is yet to make a convincing case for the need for a reservoir.

“In the meantime we remain opposed to this proposal.

“Vale of White Horse District Council has safeguarded this land for a reservoir in its Local Plan 2031 – this is to ensure that new development doesn’t prevent the potential new reservoir.

“If Thames Water did bring plans forward for a reservoir then there would be wide public consultation.”

The Vale’s local plan part two is currently under consultation and comments can be made until 5pm on May 4.

To read and comment on the draft version of the Local Plan 2031 Part Two and find out how to make comments at www.whitehorsedc.gov.uk/LPP2