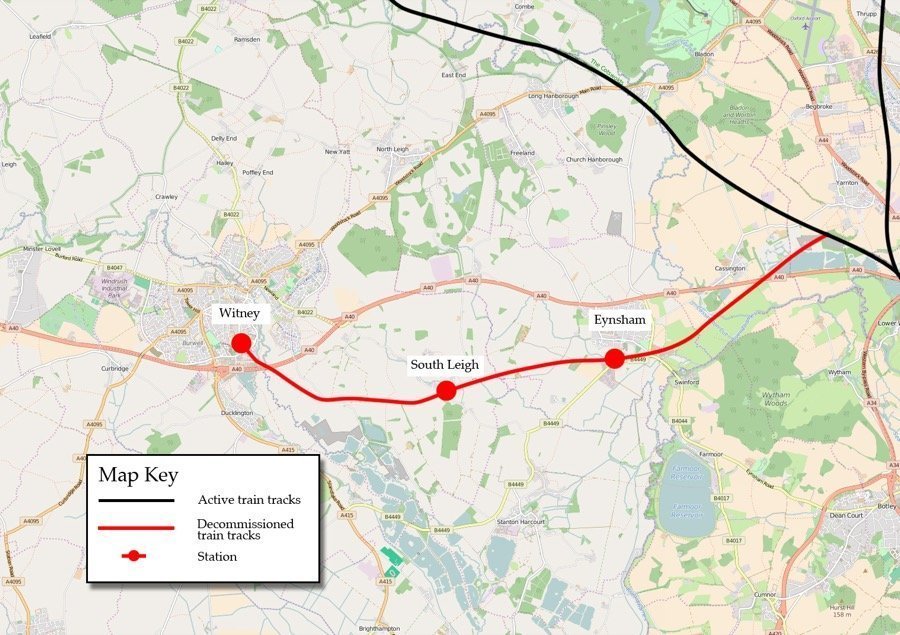 A petition calling for the reinstatement of a rail link between Witney and Oxford has gathered more than 1,000 signatures.

Launched in September, a total of 1,252 people have signed the petition, which is to be delivered to both the West Oxfordshire District Council and Oxfordshire County Council.

Mr Pearce said: “Rush-hour traffic on the A40 is always slow and can take people more than an hour to get into Oxford. Currently the plan is to make the A40 a dual carriageway to Eynsham and have a park-and-ride there.

“The plans expect half the people on the A40 to go to the park-and-ride, but it’s cheaper for people to drive so they’re not going to pay for the park-and-ride as it’s slower for them and costs money.”

A call to bring back into use the disused train line from Witney to Oxford by reopening Yarnton Station was voiced by the West Oxfordshire Green Party in February.

Reopening Yarnton Station would provide a link for Witney commuters to the Oxford-to-Hanborough route. It was closed in 1962 as part of the Beeching Report, marking the end of passenger trains between the town and the city.

The county council said that following support for trains in a public consultation carried out last year, discussions with lead partners Network Rail and rail operators “may be pursued in the future”.

The Green Party, which has been pressing for a rail solution to traffic problems on the A40 between Carterton and Oxford, said the consultation had been “misleading” as 29 per cent of those responding wanted a dual carriageway, but 46 per cent wanted a different solution altogether.

Witney resident Brita Sensicall believes restoring the rail link would be “fantastic”, saying the benefits would include less pollution, less stress for travellers/commuters and save traffic having to be funnelled on to the narrow roads of both Oxford and other towns.

She added: “A bit idealistic, I know, but it would be fundamentally better for Witney and the people who live here.”

But Dean Bull, another Witney local, is more sceptical of the idea and raised concerns of where the track would go.

He said on the social networking site Facebook: “Waste of time, it won’t ever happen.

“Clearly lots of people don’t know the area or where the line ran or what’s built there now.

“Putting up stupid stuff like this is just wasting people’s time and money, this will probably end up with enough signatures to go to Parliament and then waste more money being looked at there… just for them to come to the same conclusion.”

Anyone wanting to support Mr Pearce’s petition can do so at the website: https://www.change.org/p/oxfordshire-county-council-please-reinstate-the-railway-between-witney-and-oxford.