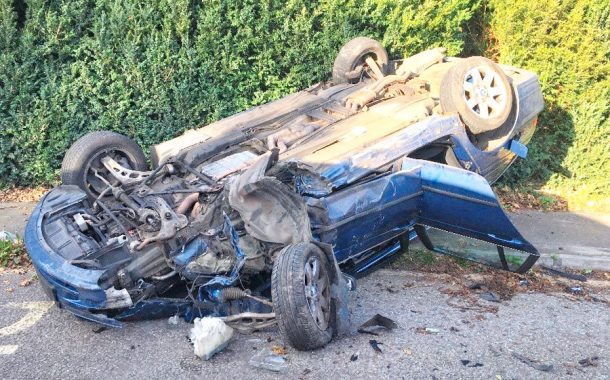 Three people escaped without life-threatening injuries after a serious multi-vehicle crash near Buckland.

Two cars were seriously damaged, with one crumpled and another ending up on its roof following the incident on the A420 on Friday afternoon.

Fire engines from Faringdon, Abingdon and a specialist rescue vehicle from Kidlington were sent to the three-car crash at 3.15pm.

On arrival the crews found a driver still trapped in a car with two further casualties requiring medical treatment.

The driver of the flipped car managed to escape from the vehicle before emergency services arrived.

Incident commander, station manager Graham Turner said: “Although three people sustained injuries as a result of the collision, thankfully these were not life threatening, which is remarkable considering the extensive damage to two vehicles in particular, one of which was flipped over and ended up on its roof in the bus layby.

“Fire crews worked closely with our colleagues in both ambulance services to ensure all three casualties were given full medical attention and removed to hospital as quickly as possible. Thames Valley Police also played a vital role in this incident in keeping the scene safe and are now investigating the cause of the collision.”