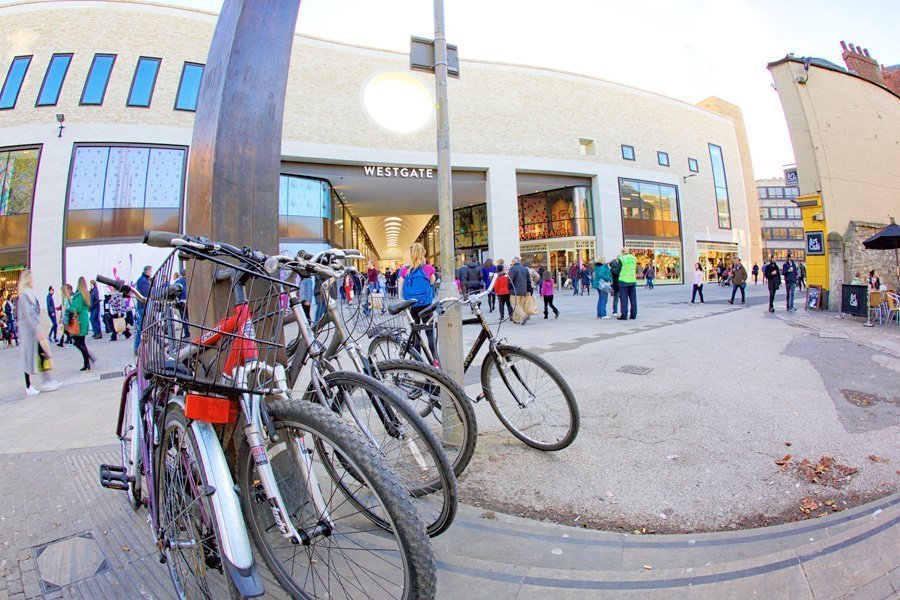 ‘Marginalised’ cyclists have hit out at a lack of promised cycling spaces following the grand re-launch of the Westgate shopping centre last week.

Cycle campaign group Cyclox has accused the developers of ‘running rings’ around the planning authorities and of breaching planning conditions after less than 20 per cent of bicycle spaces were installed on opening day.

The new £440million complex will have just over 1,000 cycling spots fitted, including a hub of about 180 spaces located inside the centre, but only 180 were installed when the ribbon was cut on Tuesday last week.

This has resulted in excessive illegal parking around the centre – particularly on the opening weekend – as cyclists attempted to park their bikes.

Developers Westgate Oxford Alliance has apologised for the delay and promised the cycle parking would be installed ‘as soon as possible’.

But Cyclox chair Simon Hunt said the shortage was ‘unacceptable’.

He said: “There are no cycle parking spaces in convenient locations – none at all.

“Overall, the storyline for cycling at new Westgate has been one of wholly inadequate planning, complete marginalisation by the developer…and deafness by the Westgate Oxford Alliance and by both councils to repeated interventions by cycling advocates like Cyclox.

“And that is only the parking.  Don’t get us started on the similar failure to provide attractive, well-signed cycle routes to and from new Westgate to help ease the major travel problems its opening will create.

“Practically nothing has been done to help cycle users to reach the new facilities, or to help staff to pedal their way to work there.”

Criticism has also come from Oxfordshire’s Green Party, which said there is ‘little prospect’ of the promised 1,000 cycle spots.

“The message to cyclists is equally clear: ‘you don’t matter’.”

In response, a Westgate Oxford Alliance spokesperson told this newspaper: “We would like to assure visitors to Westgate Oxford that over 1,000 new cycle spaces will be available for public use and we are working hard to get these installed as soon as possible.

“At present, there are 180 spaces in the immediate vicinity with many more arriving in the coming weeks.

“Current spaces are available on Thames Street and Norfolk Street around the John Lewis store, on Old Greyfriars Street where it meets Faulkner Street and Pike Terrace as well as existing spaces on St Ebbe’s Street and Penny Farthing Place.

“We apologise for any inconvenience caused by the delays.”

Nearly 2,000 people signed a petition asking the city council where the 1,000 bike racks are.

It can be viewed and/or signed at tinyurl.com/yctk6qtl