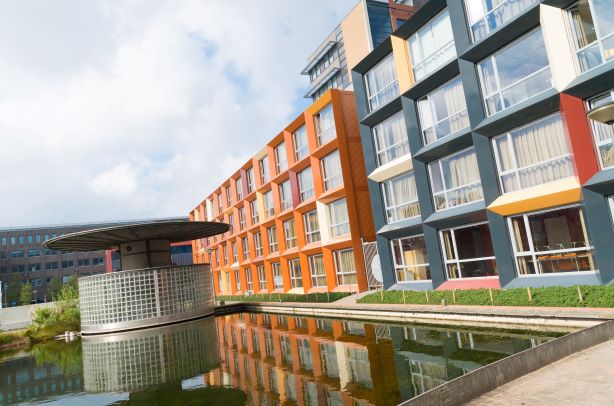 Oxford’s West End regeneration plans continue as a scheme for more than 500 student flats has been approved.

The £32.5m student housing scheme was given the go-ahead on Tuesday last week and will mark the start of the redevelopment of a key Oxford city centre site, Oxpens.

The 514-bed scheme off Osney Lane was proposed by Student Castle, which wants to demolish the existing Oxford Business Centre.

The masterplan is drawn up jointly by Oxford City Council and Nuffield College, who set up Oxford West End Development Ltd to deliver the scheme.

The plans are just one part of the city centre revamp, which will see the whole area of the West End transformed, alongside other projects such as the Westgate Centre and Frideswide Square.

Dan Lampard, senior director at Lichfields, Student Castle’s agent, said: “We are pleased to secure planning for this development which will mark the start of a vital regeneration opportunity for the city.

“The proposals will enhance Oxford’s historic setting through a sensitive approach to the scale and massing of each block.”

Mr Lampard added: “By providing purpose-built student accommodation the pressure on existing homes for student use is reduced, allowing these dwellings to meet the wider housing market needs of the area.”

There has, however, been a mix of responses as some fear that the massive project will alter historic views and change the city’s landscape.

In December, Debbie Dance, director of the Oxford Preservation Trust, said: “We are surprised and disappointed that this site does not include a substantial element of housing within the mix of uses.

“We are all well aware of the pressure for housing and the call on adjoining authorities to help meet Oxford’s unmet housing needs on the edges of the city.

“It is a site which lies at the entrance to Oxford, running parallel to the railway itself so that it is particularly visible, and the first thing that many hundreds of thousands of visitors and commuters will see as they approach Oxford by train from the London direction.

“The architects have gone to considerable lengths to employ techniques to break up the bulk and mass but nevertheless we must question whether it is right to put a development of this size, height and bulk here?”

She added: “This highly sensitive site is within one of Oxford’s protected view cones, Raleigh Park.

“With this as the precedent for the future development at Oxpens, we urge the City Council to take a strong line. Is this the right site for a single development of this nature? We ask that the applicants be asked to design something on an altogether smaller scale, with discreet buildings.”

Councillor Bob Price, leader of the city council, said: “Student Castle have worked closely with the Oxford Design Review Panel and city council planners to produce a scheme that does not breach the City View Cones policy and offers a range of different size student apartments.

“It makes excellent provision for bikes and amenity space, with green roofs, and attractive landscaping that will fit well with the wider masterplan for Oxpens.

“This development is the first step in the regeneration of Oxpens. We are planning a new city quarter with modern architecture, high environmental standards and a mix of residential and employment sites.”

It is hoped that the student flats could be occupied by 2019.