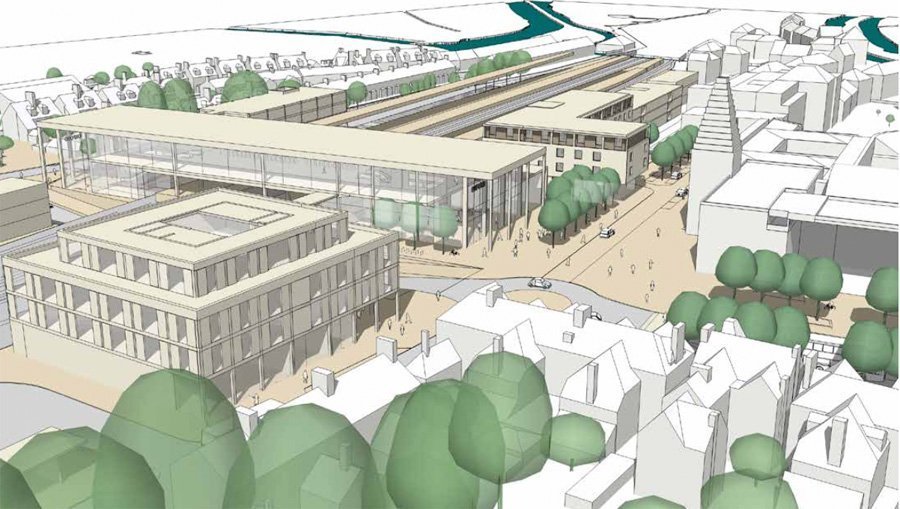 The masterplan for a major multi-million pound redevelopment of ‘inadequate’ Oxford Station has been unveiled.

A transformation plan for the 1970s station is set to be approved by city council chiefs next week and could be finalised by the autumn.

The new ‘gateway’ to the city would include extra tracks, a multi-storey car park, bus interchange, hotel, housing and an improved Botley Road bridge.

The supplementary planning document (SDP) describes the current station as “poor” and that its replacement “should provide a vastly improved level of amenity and experience”.

Leader of Oxford City Council Bob Price said: “The station is quite inadequate for the volume of passengers that are now using it and the expected growth will make it even less suitable.

“Network Rail are planning to add additional tracks running through the station and this can only be achieved by reconstruction.”

The detailed 116-page document on the scheme is set to be approved by the cabinet on Tuesday.

If accepted by council bosses the SDP would go out for public consultation on June 30, the same time as the council’s Local Plan.

Beyond that, the city council’s board member for planning Cllr Alex Hollingsworth said the timeframe for the project is not clear just yet.

He added that the redevelopment was needed not just because of the outdated look of the station but also because of the “bottleneck on the travel system”.

He said: “There are two tracks travelling towards north and just one travelling south so when there is more demand for southward travel, so we need more capacity for that.”

Efforts to secure funding for the ambitious project, which could cost £75m, are already underway but for the plan to go ahead, trees in front of the station and the nearby youth hostel would need to be removed.

Modifications to Botley Bridge would also have to be made.

The design for the new gateway was developed by the city council, county council and Network Rail following an architectural competition in 2015.

Oxfordshire’s two major bus companies have welcomed the SDP, although Martin Sutton, managing director of Stagecoach Oxfordshire, raised concerns over the siting of the bus interchange.

He said: “Many people make their way to and from the station by bus and bus stops are currently located conveniently outside the station entrance.

“It is regrettable that buses are proposed to be some little distance away, and will no longer be immediately visible on leaving the station – essential for effective bus/rail integration.”

He added that the design in the SPD was for ‘indicative purposes’ only.

She said buses and taxis being parked on the opposite side of the station on Botley Road “is not ideal”.

Phil Southall, managing director of Oxford Bus Company, said the new facility would improve the number of services the firm would run.