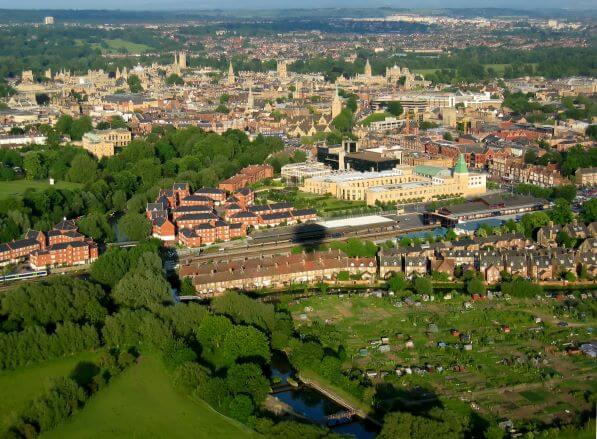 People living in urban areas in south-east England are more likely to die from air pollution, says a new study. More than one in 19 deaths in our largest towns and cities are linked to air pollution, which ranks third among the top seven sustainability challenges in Oxfordshire, costing the county a staggering £207,000,000 annually.

Dick Wolff, Sheriff, Green Group Deputy Leader and shadow member for transport, culture and communities at Oxford City Council, commented: “In the current pandemic, the last thing we need is more pressure on our lungs, hearts and circulatory systems from nitrogen dioxide and particulate matter, at more than four times the WHO-recommended values.”

Air pollution has just been found to seriously endanger people’s health at levels even lower than previously thought, and the WHO has revised its policy in line with the new scientific findings. The UK’s legal limits are now 4 times higher than the WHO recommends, and 90% of the UK’s local authorities are currently still breaching even the UK’s high thresholds.

“The extent of the problem is, without exaggeration, vast” says Cllr Wolff, “and what we need is a prompt implementation of Clean Air Zones (CAZs). UK Government research shows that these are the most effective way to quickly reduce illegal and harmful levels of air pollution in urban areas – they protect people, and quickly.”

London’s Ultra-Low Emission Zone (“ULEZ”) – kicked off in April 2019 – is about to be extended to a larger area (“ULEX”), going live on 25 October. Oxford City’s Zero Emission Zone (ZEZ) pilot scheme, initially scheduled to start this August, has just been pushed back by 6 months and is now set to start in February 2022 only, with the new timing yet to be confirmed. The pilot will initially be limited to a small area in the City Centre, to test the scheme before expanding it to a wider area.

NGOs and mobilised parents, organised in grassroots movements like the Clean Air Parents Network, are fighting to protect their children’s health and life, calling for CAZs, clean transport and a new Clean Air Act. In a recent UK landmark case, a coroner has for the first time confirmed air pollution as an official cause of death: the case concerned a little nine-year-old girl who had multiple seizures and was admitted to hospital 27 times in the three years before her death, as a consequence of air pollution.

“The tragic case of Ella Kissi-Debrah shows how severely air pollution affects notably our little ones”, Cllr Wolff says. “We really need to redouble our efforts, to do justice to the severe impact on citizens overall and children in particular. CAZs need to be combined with other urgent action, including reforestation and sustainable spatial planning, to price out cars and incentivise active travel. And transitioning to zero carbon will be a win-win, not only helping our carbon budget, but simultaneously addressing air quality, too.”

“Both the climate emergency and the pandemic require us to think globally and act locally – more than ever before” Cllr Wolff urges. “MPs have just voted against tougher air quality targets in the Environment Bill, and our children and citizens now depend on us to step up ambition locally”, he says.

Only last month, the High Court had confirmed that the failure to address air pollution triggers duties under the Human Rights Act, and this month, the UN’s main human rights body has overwhelmingly voted to recognise the right to a safe, clean, healthy and sustainable environment as no less than a human right. Cllr Wolff says: “This is a very strong political signal, not only from the UK judiciary, but also from global leaders. We need to do our utmost to make this human right a reality now – in our City and beyond.”