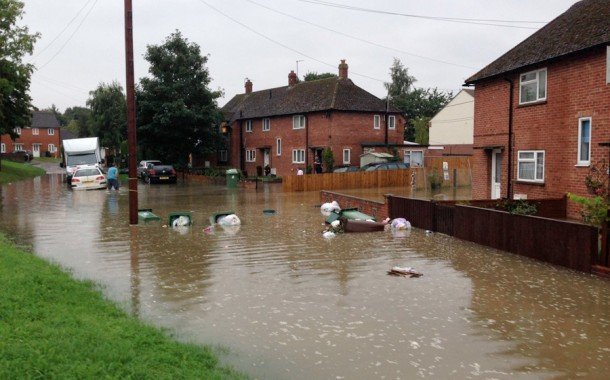 Overnight flash flooding in Didcot has caused disruption for commuters this morning.

Torrential rain across the south of Oxfordshire began around 8pm last night and continued at 4am today.

And, as a result, flash flooding in Didcot has caused cancellations and delays at Didcot Parkway, as well as on the roads.

A statement on Great Western Rail’s website read: “Flooding at Didcot Parkway has resulted in the Station being inaccessible to customers travelling towards Oxford and Reading/London Paddington.

“The platform towards Swindon, Bristol and South Wales is open.

“Customers travelling from Didcot towards London are to travel to Swindon and then back toward Reading/London Paddington.”

The fire service is currently trying to pump out water from Didcot’s railway station, which has been closed all morning. Bus replacements are running from the Didcot Parkway short-stay car park.

Hitchcock Way in Didcot is closed in both directions due to the flooding between the Orchard Centre traffic lights and Didcot Parkway.

Oxfordshire County Council confirmed the Oxfordshire Fire and Rescue Service have been helping reduce the disruption.

They said their firefighters have been active in Cholsey, East Hagbourne, Didcot, South Stoke, Wallingford and Goring.

They said: “It’s been a long night for our Oxfordshire firefighters who have dealt with a spate of flooding related calls since 4am.

“Worst of the rain has now passed. Flash flooding beginning to recede. Don’t drive through floodwater on roads. You may become stranded.”

Group manager Gary Coupar of Oxfordshire Fire and Rescue said: “We’ve had to deal with a number of instances of cars becoming stranded as a result of trying to drive through floodwater.”

Firefighters attended Wallingford Community Hospital where some parts of the buildings were affected by flooding.

They have also been working to protect some properties from waters on Station Road in Cholsey.

Flood alerts are in place for Steventon and Sutton Courtenay.

Flash flooding has seriously impacted large areas of the south of England.

A train from Milton Keynes to Euston has derailed near Watford Junction with two reported injures, while a house was hit by lightning in Christchurch, Dorset.

Newbury station was also closed but one platform reopened around 9am.