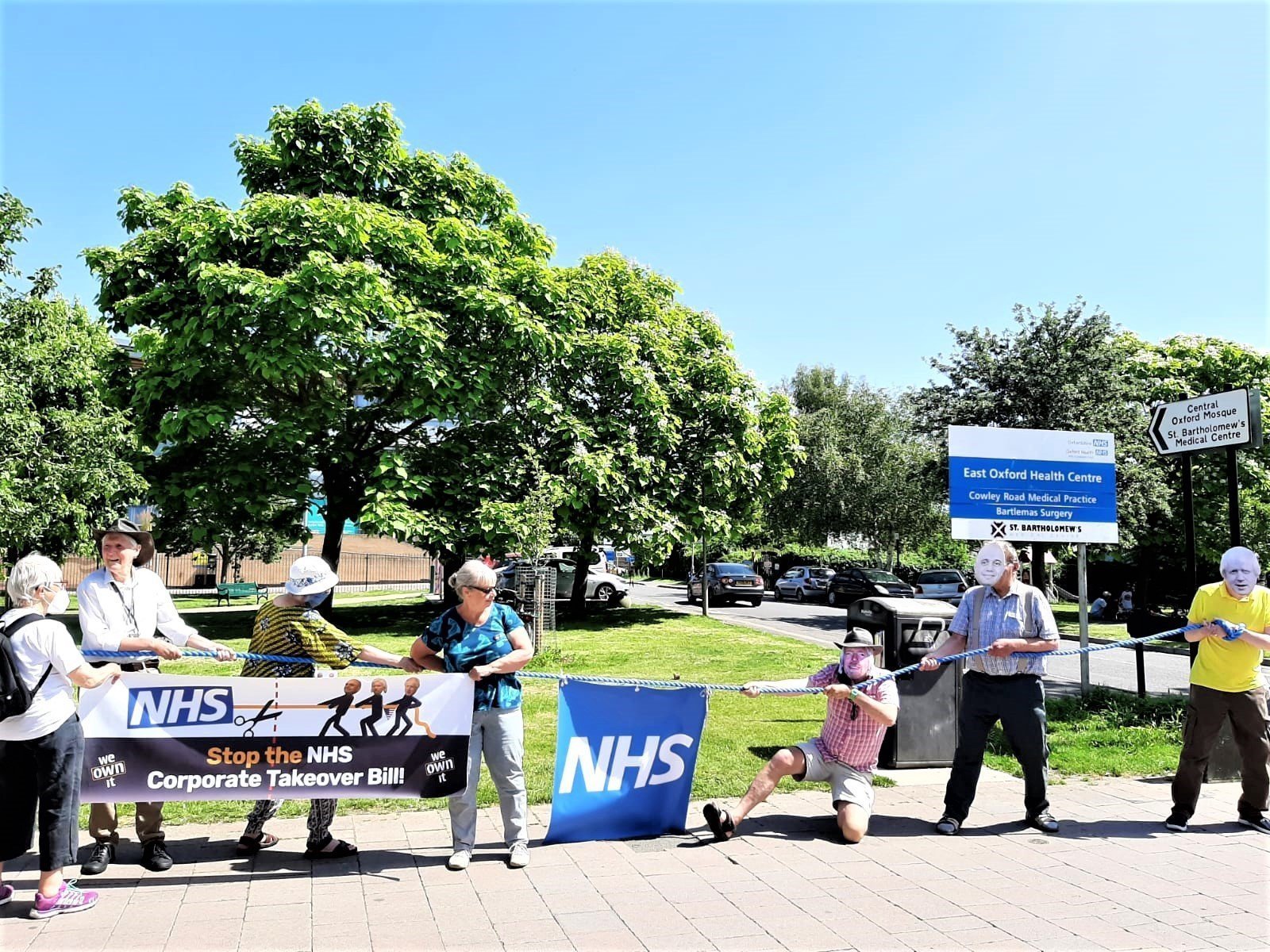 At 11am on Saturday July 17,campaigners staged a tug of war at East Oxford Health Centre between private healthcare providers and the public. The stunt was a protest against the Health and Care Bill which passed its second reading in the House of Commons on July 14 – legislation which campaigners have branded a “corporate takeover Bill”.

As part of the tug of war, one team were dressed as Virgin founder Richard Branson, Serco CEO Rupert Soames, Health Secretary Sajid Javid and Baroness Dido Harding. The other was a heartfelt tribute to patients, doctors and nurses.

NHS campaigners have claimed that the forthcoming Health and Care Bill will increase the private sector’s involvement in the NHS and have called for the new Health Secretary Sajid Javid to withdraw the legislation.

Among concerns raised by campaigners are the proposed changes to the rules for contracting NHS services. Presently, Section 75 of the 2012 Health and Social Care Act requires a process of compulsory competitive tendering for NHS services. The government’s new legislation would end this requirement, which campaigners claim would make it much easier for services to be contracted to the private sector without checks and balances.

Further concerns have been raised about proposals for new ‘Integrated Care Systems’ (ICS) boards – new bodies within the NHS designed to bring together all bodies working within the health service to work on public health strategy. However, campaigners have warned that the forthcoming Bill would allow private companies to sit on such decision-making boards, arguing that this creates potential for conflict of interest.

“I was shocked when I heard about the details of the government’s plans for our NHS. With the year we’ve had, our precious health service should be being invested in and cared for.

“Instead, the government is planning to open the NHS up to further privatisation, with profit hungry companies being given a seat at the decision making table.

“We’re campaigning today to stop this outrageous attack on our health service. We want our NHS to be run for all of us, not in the interests of private companies.”

The stunt in Oxford is taking place alongside dozens of others in towns across the country including Lewes and Leamington.

We Own It – the group coordinating the protests nationally – has said that allowing private companies to sit on NHS decision-making boards would “undermine the principles at the core of the NHS”.

“Over the last year, our NHS has been the lifeblood of our country – keeping so many of us safe during the pandemic. The last thing it needs right now is a dangerous and damaging overhaul which would put the private sector at the heart of our health service.

“One of the most worrying aspects is the prospect that for-profit private companies – the likes of Virgin Care and Serco – could be sitting on boards making calls on where NHS money gets spent.This private oversight of our healthcare would undermine the principles at the core of the NHS.

“If the government cares about the future of our NHS and what the public want from it, they should rethink and withdraw this reckless Health and Care Bill. We cannot allow this corporate takeover to go ahead.”

The protests come as parts of the NHS are already moving towards the ICS model in anticipation of the legislation. Recently, Virgin Care’s Managing Director was given a seat on an ICS board covering Bath and North East Somerset.

A petition launched by We Own It in opposition to the Health and Care Bill has received over 59,000 signatures.