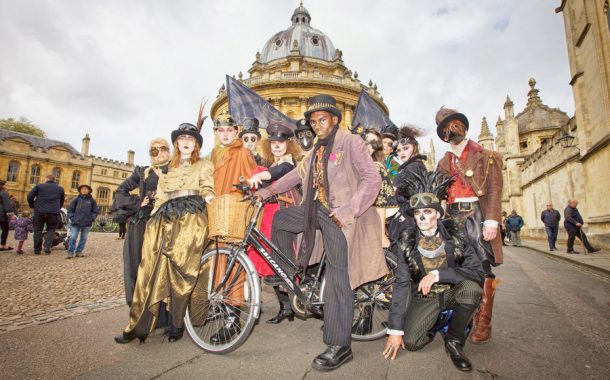 The ambitious Westgate Oxford shopping centre finally opened its doors to the public with a show of acrobatics and ribbon-cutting ceremonies to unveil the new shops.

Just 64 of the expected 100 shops opened on Tuesday morning, with 12 restaurants and cafes also ready to welcome new customers.

The £440million venture created up to 1,000 construction jobs and an additional 3,400 retail positions.

There are a total 125 units inside the centre, with 90 of those expected to be filled by Christmas.

Plans for the centre were approved in 2014 and construction started in early 2015, after several pitches for redevelopment plans over the years.

Oxford City Council leader  Bob Price said: “I’m delighted to see the opening of the redeveloped Westgate, especially after having seen so many proposed schemes come and go unrealised over the years. From regularly having to listen to residents and visitors complaining that shopping in Oxford is disappointing, we now have a regionally competitive shopping, eating and entertainment destination.”

The council has worked with Westgate Oxford Alliance, Oxfordshire County Council, and bus operators Oxford Bus and Stagecoach to come up with plans which include expanding Seacourt Park and Ride by adding 1,000 extra spaces, as well as promoting use of buses and cycling.

Opening hours are Monday to Friday 10am to 8pm, Saturday 9am to 8pm and Sunday 11am to 5pm.