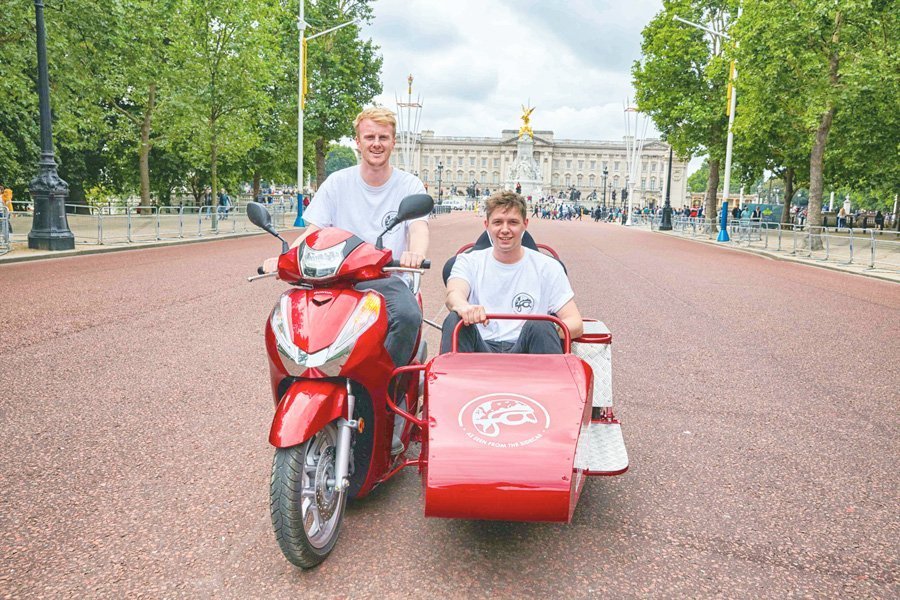 TWO friends from Banbury are attempting a Guinness World Record by circumnavigating the globe riding a scooter and sidecar.

Just a few weeks ago Matt Bishop, 26, and Reece Gilkes, 25, both former travel consultants, left England to embark on an 18-month round the world trip in which they will ride 40,000 miles across more than 50 countries.

Their send-off involved riding from London to Paris to rally against modern day slavery with 65 others.

Now the pair are on their own – they have already made it through the Alps to Lake Bled in Slovenia and are about to head south for Africa.

Reece said: “We had absolutely no experience with motorbikes whatsoever. We didn’t even know how they worked, let alone how to ride one.

“We had absolutely no mechanical expertise, but we quickly learned the basics when we needed to put a chain back on, in the dark, in the rain and on the side of a road.

“We’ve also undertaken emergency survival training with Survival Wisdom to better prepare ourselves for the expedition.”

The trip has been two years in planning and is being sponsored by Flight Centre UK.

It will involve travelling on a Honda SH300i scooter and a home-made sidecar across a mixture of tarmac, mud, gravel, ice and sand, with temperatures reaching highs of 40c and lows of minus 30c.

They want to raise awareness of modern day slavery and raise £50,000 for organisations including Unseen UK and Freedom United that fight the issue.

Matt said: “I genuinely believe somebody needs to go around the world and tell real stories of real people.

“Hate crime is on the rise pretty much everywhere, a lot of scaremongering and fear seems to be creeping into people’s decisions back home and I think we could all do with a silly little reminder of just how similar everyone is everywhere and how brilliant the vast majority of the people on the planet are.”

As for the trip so far, Matt said: “We’ve been doing it for two weeks now and probably have around another 75 weeks to go. It’s a strange feeling to just keep driving.

“We’re going a bit loopy on the road.

“We talk to each other through an intercom and spend most of our days singing songs in the voices of various TV characters – Boycie from Only Fools and Horses has made regular appearances.”

In preparation for the trip, Matt and Reece completed a 2,200-mile ride from London to Lands’ End, to John O’Groats, to London again on a couple of Yamaha YBR 125’s last December.

To learn more about the expedition, or to donate view asseenfromthesidecar.org.