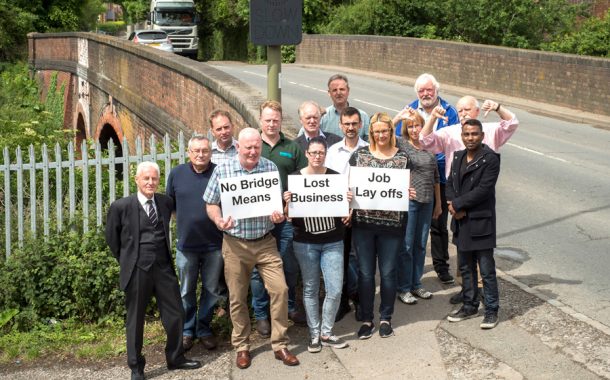 Dozens of angry residents have accused Network Rail of not providing suitable evidence to destroy a grade-II listed railway bridge.

The tracks operator has applied to demolish then reconstruct the bridge at Steventon and close off High Street as part of a 10-month project to electrify the railway.

The bridge could be closed in December, halting traffic until at least October 2018.

Councillors and residents voiced their opposition to the project at a Steventon Parish Council planning meeting at the village hall on Tuesday. They accused Network Rail of failing to fully justify their application and not properly considering alternatives.

Parish council chairman Chris Wilding said the railway operator had failed to present their application in a way “that shows their thinking to why they have dismissed certain options”.

“There has been no consultation with local businesses or major stakeholders – it’s going to have a big impact all around.”

Due to the “exceptional engineering challenge” of electrifying the railway, Network Rail said it considered five options.

According to parish councillors, 32,000 vehicles pass over the bridge during an average week. On the eight occasions in the last 13 months the A34 has been unintentionally shut, this increased to 64,000.

The council said: “We intend to rebut this application in the strongest possible terms and hold this opaque, publicly-funded yet privately-operated organisation to a suitably high standard of evidence before they are permitted to embark on this poorly thought-out plan to destroy a historic listed structure and cause turmoil in the daily lives of thousands.”

Steventon bridge would have a temporary foot and cycle bridge erected during reconstruction.

A Network Rail spokesman said:  “Discussions are under way with Oxfordshire County Council about the road diversion that will be necessary and, should the application be approved, the agreed diversionary route will be publicised well in advance.”

Vale of White Horse has set a target decision date for June 22.

Business owners in Steventon High Street have hit out at the plans to close the railway bridge.

The main route through the village consists of pubs, a veterinary surgery, hairdresser, B&B, convenience store, post office and a sandwich shop  – and they are worried for their futures.

Hamid Ghaffari, who has only owned Munchies for less than a month, described the closure as “outrageous”.

He said: “There has to be another solution. Residents and businesses are not happy – it’s going to impact our trade badly.

“It’s difficult to quantify but I think it’s going to be drastic. It would be a shame if, in a few months, I lose half my business.”

Jason Kibble, manager of the Cherry Tree Pub for 11 months, said he fears a significant loss of trade and that he will have to cut staff hours.

He said: “We’d have to completely change things here because it will have a massive impact.

“There isn’t any way to pull customers in if they can’t get here.

“We are going to be quiet. There’s no way we will be as busy as we are normally so hours will have to be cut because we have to make savings.”

Mr Kibble said relying on villagers for 10 months means the pub would miss its targets set by owners Wadworth brewery.

Both firms said they rely on lunchtime trade from Milton Park and Harwell workers.

But worried businesses have the support of government body Historic England, which has said any justified plan to close the bridge must have “the minimum necessary amount of harm” to the area.