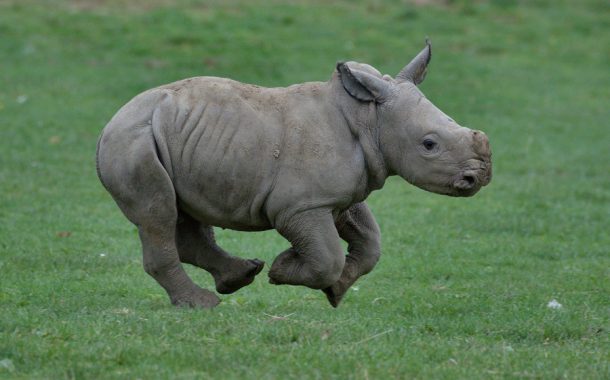 It’s been a breeding success for zookeepers in Burford as they welcomed Alan, a curious baby rhino.

Staff at Cotswold Wildlife Park welcomed the newest addition to the ‘crash’, the collective noun for a group of rhinos, last month.

The white rhino calf, born to parents Ruby and Monty, is the fourth birth at the park since 2013 – which came after almost 40 years of hoping the park’s rhinos would breed.

Managing director at the park, Reggie Heyworth, said: “Everyone is overjoyed about the birth of another rhino calf to Ruby, who is being such a good mother, for the second time.

“The calf looks like a strong lad already, and the rest of the rhino ‘crash’ seem to be taking his arrival in their stride. With rhinos facing such poaching pressures in the wild, every birth in captivity is a sign of hope for this wonderful species.”

Named in honour of the park’s electrician who retires this year after 23 years of service, Alan, weighing 11 stone a week after his birth, was described as a ‘high-spirited and boisterous youngster’.

Births in captivity are extremely rare, with only 13 white rhinos born in European zoos in the last 12 months.