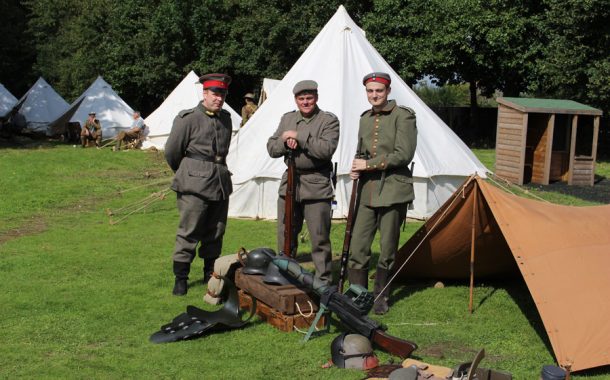 Children, adults and history buffs descended on a railway centre to relive the experiences of a soldier as part of the 100th anniversary of the First World War.

An exhibition shedding light on the history of the Didcot centre and its contribution during the war opened at the weekend.

History fans of all ages and re-enactment actors dressed in period uniforms marked the opening of the ‘Rails on the Western Front’ exhibition.

Children and adults listened intently to tales of wartime history and had a chance to relive the experience of soldiers through a military camp display.

There was also a recreation of a French station with an ambulance train as a main feature, as well as a display where visitors could add their own memories about their family’s experience and connection with the war.

Ann Middleton, a long-time volunteer of the Great Western Society, who run the centre, proudly spoke about their efforts of bringing the past back to life.

She added: “We were very lucky to get support from Didcot town council and now further funding.

“What we need now is for people to come by and enjoy and support the exhibition.”

Mark Randall, from Surrey, said he made the trip to Didcot to display his personal collection of wartime items.

He joined the event as part of the Great War Society, a living history group that attend events across the UK and Europe.

He said: “Like most people here, I had an interest in the history of the war anyway and most of us have been collecting things for years.”

The exhibition was brought to the public after the centre was awarded an £8,700 grant from the Heritage Lottery Fund (HLF) of the National Lottery.

The funds were available as part of the ‘First World War then and now programme’, a nationwide initiative to mark the centenary and explore the legacy of the war beyond 1918.

Ciaran Johnson, a member of the Great Western Society, helped put the application forward for the grant.

He said he has always had an interest in the war and had two relatives who fought in the War.

He added: “We have a great collection of historical pieces here, and we have to try and make the most of it.”