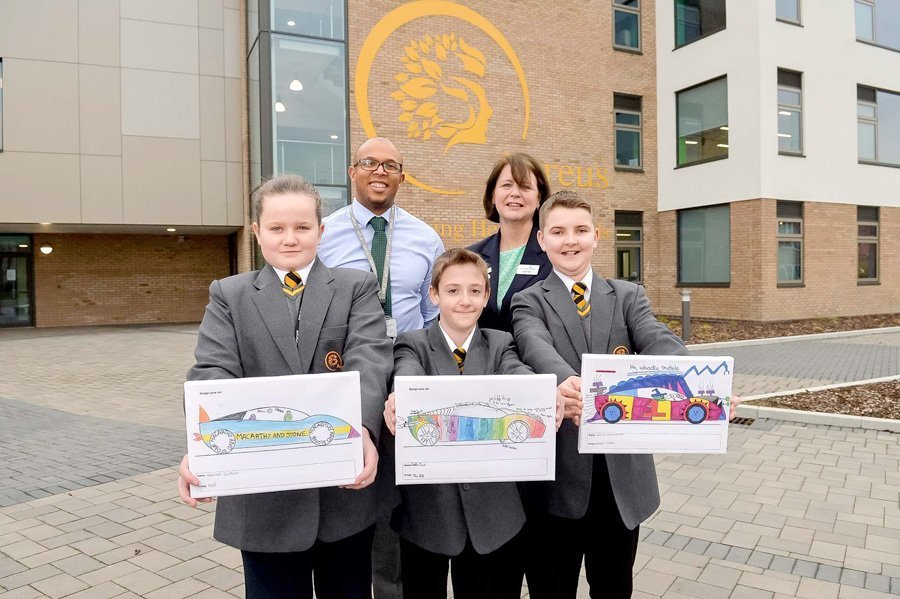 Artsy pupils at a Didcot school showcased all their creative talents in a competition inspired by Oxfordshire’s connections to Formula One.

Property developer McCarthy & Stone asked pupils at Aureus School, at Great Western Park, to design a race car in honour of the sport’s rich links with the area.

Buzzing with enthusiasm, more than 100 imaginative entries were submitted by the secondary school youngsters.

Lewis McCormick took home first prize and a £50 book token for his whacky design that was powered by tinsel.

Second place went to the rainbow design from Freddie Finch and third place went to Hannah Dickson for her McCarthy & Stone themed car design, both of which won £25 book tokens.

McCarthy & Stone sales executive Janet Rose presented the winners with their prizes during an assembly.

All of the winning designs have been installed in the sales office at Williams Place, a retirement village also on GWP. McCarthy & Stone also donated £500 to the art department at the school.

Assistant headteacher Chris Hunt said: “On behalf of Aureus School, I would like to thank McCarthy & Stone for their support.

“The pupils thoroughly enjoyed creating their race car designs and we look forward to building on our relationship with McCarthy & Stone as it continues to establish a presence in Didcot.�?

Janet Rose, sales executive for Williams Place, said: “As a company, we appreciate that our responsibility is not only to build quality, purpose-built retirement properties, but also to create a positive legacy in the communities in which we build.

“Aureus School is a superb school in the area and we are delighted to be able give their art department a helping hand.�?

McCarthy & Stone named Williams Place after Sir Frank Williams, the founder and team principal of the Williams Formula One racing team, which used to be based in Didcot and is now in Grove.

Oxfordshire boasts three of the 10 Formula One teams – Williams (Grove), Renault (Enstone) and Haas (Banbury). Manor was also based in Banbury before the team shut down last year.