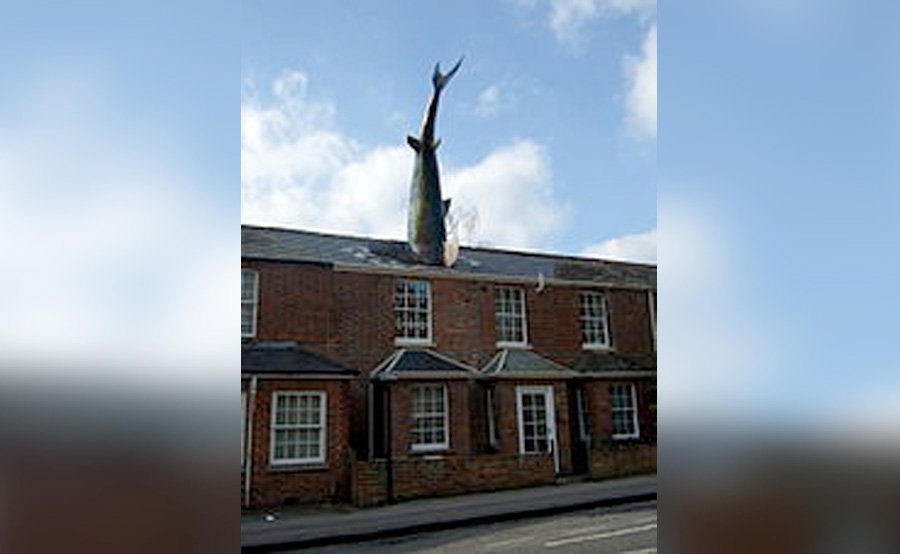 A 7.5metre shark crashing head-first into the roof tiles of a three-bedroom house could become subject to special status as a protected heritage asset.

The quirky shark house, which has attracted several tourists to New Street in Headington, could be listed as a protected building.

Its owner, journalist and broadcaster Bill Heine, commissioned the sculpture more than 30 years ago.

He won an appeal against Oxford City Council who tried to have it taken down on grounds of safety and on the ground that it had not given planning permission for the shark.

Refusing to back down, Mr Heine appealed to the then Secretary of State for the Environment Michael Heseltine, who came out in favour of the shark in 1992.

The fibre glass shark, created by sculptor John Buckley, was created as a protest against the American bombing of Libya, and was unveiled on the 41st anniversary of the dropping of the atomic bomb in Nagasaki.

An application for it to be listed on the Oxford Heritage Assets Register will now go to the city council for consideration, with a decision expected by council heritage officers in the summer.

Headington councillor Ruth Wilkinson, who is campaigning for the building to be listed, said: “We were all shocked that such an iconic landmark had no protection in planning terms.

“A group has formed to get it listed  on the Oxford Heritage Assets Register as soon as possible. We also want to complete an application to Historic England for national listing but that will take a while longer. Apparently there is already a listing for Guy the Gorilla, so why not the Headington Shark?”

The radio presenter owned the house until 2016 when his son Magnus Hanson-Heine then decided to buy it to ensure it stays as is.

Speaking to the Guardian in March, he said: “I had no intention of buying property, least of all in Oxford, but dad had remortgaged the house in 2007 just before the first leg of the financial crash hit, and the bank was threatening to repossess the property. It looked increasingly likely that the shark would be “tidied up” so the property could be sold off as a regular terraced house. This much-loved piece of art might be destroyed by another set of bureaucrats unable to deal with something that wouldn’t fit a standardised form.

“I couldn’t allow that to happen.”

In November, Mr Heine was diagnosed with leukaemia and told by doctors he had 18 months to live.