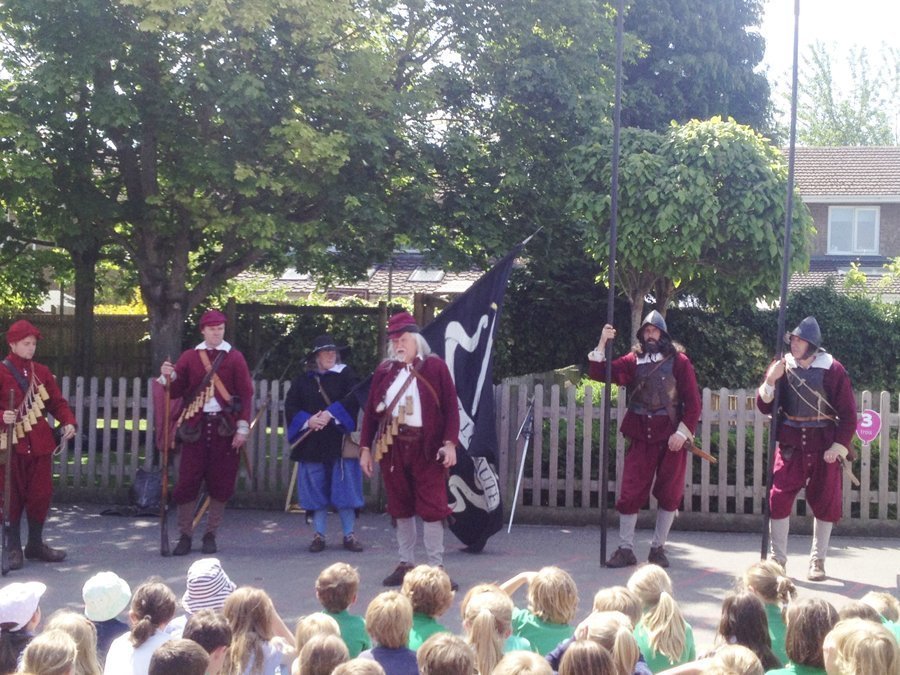 Wallingford school children were treated to a preview of civil war action before the ‘Siege of Wallingford’ re-enactment this weekend.

Pupils from St John’s Primary School in St John’s Road got a glimpse of the weekend’s action when volunteers from the English Civil War Society brought the battle to life.

The volunteers used musket guns and spear-like pike weapons to teach the five to 11-year-old pupils what fighting was like in the English Civil War from 1642-1651.

Nine-year-old James Powell shone out as the one with all the answers to questions asked by the volunteers.

He said: “History is my favourite subject and I absolutely loved it today, especially when they shot the gun!”

Eve Lidbetter, 10, added: “It was so exciting, I really enjoyed it. I like learning about wars and so it was great to see everything happen in front of my eyes.”

The school gave its pupils lessons this week on Wallingford’s role as a stronghold in the English Civil War and are encouraging the children to head down to this weekend’s event.

Thomas Bodaert, 11, said: “It was such a great experience and I’m going to try and drag my parents down to it.

“I was stunned when they shot the gun.”

Headteacher Nicola Hughes said: “We jumped at the chance to have the society down. It’s a really exciting time for the town and we loved being a part of the preparations for the event.”

Wallingford will see history repeat itself on Saturday and Sunday as about 500 volunteers transform into foot soldiers, with cavalry and artillery from 11am until 5pm on both days.

A living history camp will be set up throughout the weekend at Wallingford Castle Gardens.

A military drill display will run from 11.30pm until Midday in Castle Meadows, followed by a cavalry march at 2.15pm to 2.45pm from the Kinecroft through Market Place to Castle Meadows.

While the main battle re-enactment will rage from 3pm to 4pm in Castle Meadows.