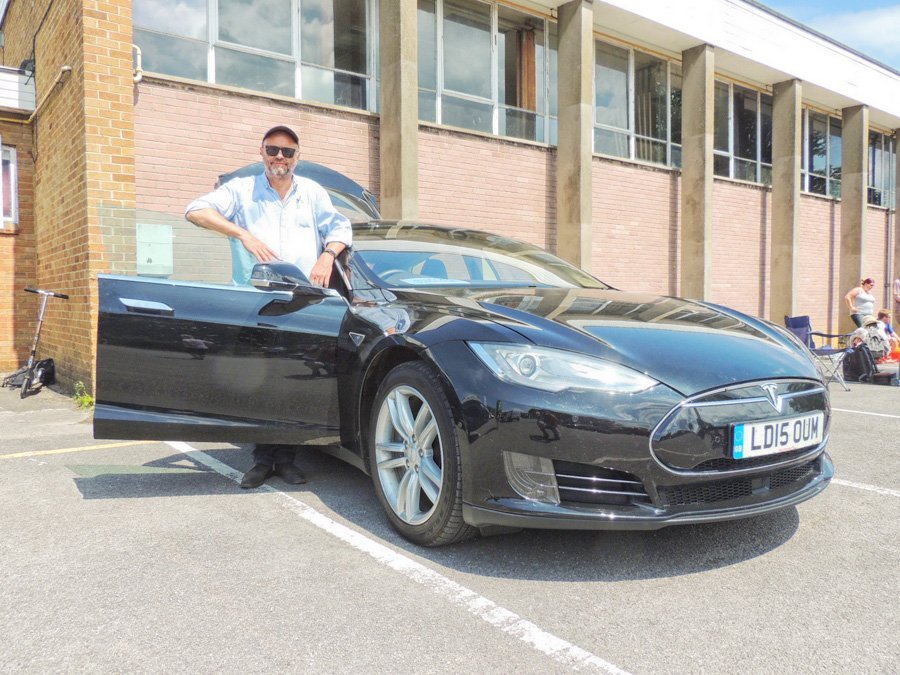 Embracing electric was the theme of a special event held in Oxford on Sunday to encourage more people to make the switch to cleaner powered cars.

Test Drive the Future was held at Cherwell School as part of Oxford Green Week, where visitors could take an electric car out for a drive and find out more about how the technology works.

Electric bicycles were also available for testing, as well as a model car building workshop and a talk by green energy enthusiast and Red Dwarf star Robert Llewellyn.

Robert hosts a show on YouTube called Fully Charged about the advancements in green technology, and has been solely driving electric cars since 2010.

He spoke to The Oxford Paper about the challenge of trying to promote electric vehicles to the wider public, and the improvements in technology in the last five to 10 years.

He said: “My long-term ambition is that I encourage the world to try and stop burning stuff in order to do what we do.

“A huge amount of what we do now, we can carry on doing it but we don’t need to burn anything, and I think that’s really the next step for the human race.

“We’ve been burning stuff since we lived in caves, and when you burn stuff, you can’t burn it again, so that’s my bottom line.”

Robert was in Oxford with his electric Tesla Model S, which has been charged from solar panels on the top of his Gloucestershire house.

His car can achieve around 250 miles on a single charge – more than most on the market, which are usually around the 150-mile mark.

He added: “Battery density is always improving. It’s increased to such a degree that it’s more than doubled the range.

“I think electric cars will find their balance around 150 miles on one charge, it’s kind of all you need. That covers 99 per cent of the drives we do.

“I still think it’s going to be people who are prepared to make the change because we’re so used to petrol and diesel cars, but there’s so many advantages. My generation will never do it and probably the generation now in their 40s won’t, but the generation at school now are much more accepting of new technology.”

Test Drive the Future is one of a series of events taking place as part of Oxford Green Week, organised by the city council.

Green Week organiser Jenny Carr said: “We hope by showcasing what people, organisations and communities are doing that’s positive for the environment, it can inspire others to do the same.

“There’s things people can do that will have a positive impact on the environment and are not always difficult to do.

“It’s really pointing out that being green isn’t a niche thing for a few old hippies that people might perceive, it’s actually something that’s good for everybody’s health and wellbeing, and good for saving money as well.”

• The Lightbulb Conspiracy film screening, 6.30pm-8.30pm, Objects of Use

For full details on any of the events, go to oxfordgreenweek.org.