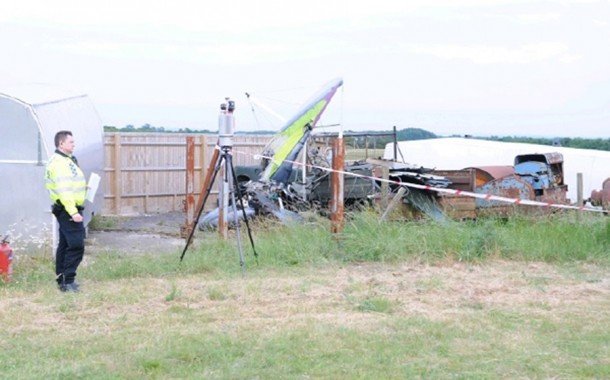 A verdict of accidental death was returned by an Oxford inquest jury yesterday on two men who died in a plane crash at Enstone airfield last summer.

Keith Poulton, 59, of Rugby, and Connor Morris, also known as Edward, 62, of Witney, perished when their fixed-wing Pegasus Quik microlight aircraft smashed through a wire fence and collided with a lorry trailer on landing – both were confirmed dead at the scene.

Accountant Mr Poulton was Dr Morris’ passenger on the flight when it left the airfield at approximately 7.10pm on Friday, July 3. A post mortem revealed that both men died from multiple injuries that were unsurvivable.

The crash happened after Dr Morris had completed a circuit before attempting to land.

But he landed quite far down the runway, slowing down before accelerating as if to take off again. Onlookers were shocked as the aircraft then smashed through the fencing and crashed under the trailer.

The incident happened close to their wives and family who rushed to help.

Dr Morris’ wife, Lesley Morris, said: “It was a dreadful accident caused by a combination of factors. It is a great tragedy for both families. We are all devastated by the loss of these two adventurous, lively, active, humorous, family-loving men.”

Emergency services arrived within nine minutes of being called at 7.16pm, but the two men were confirmed dead shortly afterwards.

According to the Air Accidents Investigation Branch (AAIB), which released its report into the incident in January, the aircraft was 39kg – or eight per cent – overweight.

The report said: “Even if the aircraft had not been over-loaded, there was insufficient distance remaining to take off again from the point at which power was reapplied.

“The extra weight is considered to have been a contributory factor to the accident,” it said.

Although Dr Morris was an experienced pilot with more than 200 hours’ flying experience, he had not flown a microlight with an instructor since gaining his licence in 2006 and his microlight rating had since lapsed.

To maintain their ratings, pilots are required to gain 12 hours of experience flying a microlight, including eight hours in sole control – otherwise, they have to redo all their tests in the case of a lapse.

Oxfordshire coroner Darren Salter will write to the Enstone airfield owners in addition to writing a regulatory report to the Civil Aviation Authority about making changes to runways to reduce hazards such as the presence of lorry trailers.

Phillip Sleight, a professional engineer, who led the AAIB investigation, confirmed there were no technological defects with the microlight.