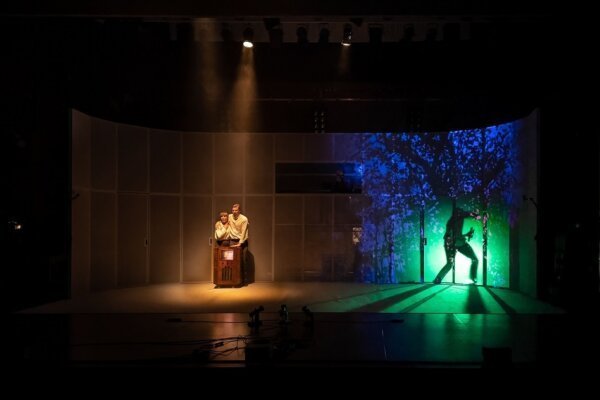 Following sold-out runs in London and Edinburgh, Rhum and Clay’s critically acclaimed adaptation of HG Wells’ The War of the Worlds comes to Corn Exchange Newbury on Friday 10 and Saturday 11 September.

Inspired by Orson Welles’ classic radio play almost 80 years to the day since the original broadcast was reported to have caused widespread panic in its listeners, this legendary icon of science fiction is reimagined for our era of deliberate disinformation, ‘fake news’ and ‘alternative facts’. An era where mistrust and fear are routinely stoked by the purveyors of ‘news’ and the truth has become an ever-harder concept to identify. The War of the Worlds slips between 20th and 21st century lives and listeners as if moving the dial on a radio: atmospheric and disorienting. 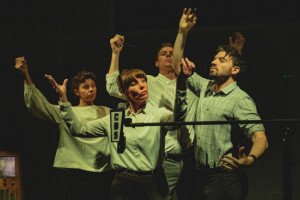 Rhum and Clay are renowned for the humour and physicality of their productions as well as their ability to create beautiful, visually textured on-stage worlds. They are joined here by Isley Lynn, writer of the extraordinary sexual odyssey Skin a Cat, currently being adapted for television. Her powerful contemporary voice offers a welcome counterpoint to a story that originated in the male-dominated society of the 19th and early 20th centuries.

The War of the Worlds explores our inability to separate fact from fiction and our active complicity in the process of being hoodwinked: lies dressed as truth and truth presented as fiction. But even fake events cause real reactions. With references ranging from H.G Wells and Orson Welles via Jeff Wayne and a nod to Tom Cruise, this intense, unsettling and raucously entertaining reinvention of the original alien invasion myth shows that in the darkest of times, the truth is a very precious commodity.

Rhum and Clay last visited the Corn Exchange in 2018 with Testosterone, the true story of a trans man’s search for a new male identity, which is still touring worldwide. Their other recent productions include a tour-de-force one-man adaptation of Dario Fo’s classic, Mistero Buffo which won the Stage Award for Acting Excellence at the 2018 Edinburgh Fringe.

Rhum and Clay’s The War of the Worlds comes to the Corn Exchange on Friday 10 and Saturday 11 September. Performances take place at 7.45pm and there is also a matinee performance at 2.30pm on the Saturday. For tickets and more information please visit www.cornexchangenew.com or call 0845 5218 218 (calls cost 2p per minute plus your telephone company’s access charge).

Who are Rhum and Clay?

Created at Ecole Jacques Lecoq in Paris in 2010, Rhum & Clay is a multi-award-winning theatre ensemble led by artistic directors Julian Spooner and Matt Wells. Their work is, as you’d expect with that pedigree, physically ingenious and skilful, shape-shifting in style from show to show. They work as an ensemble, collaborating with writers, musicians, dancers, designers and anyone with an interesting story to tell.

Who are New Diorama Theatre?

New Diorama Theatre is a pioneering venue in the heart of London dedicated to providing a home for theatre ensembles, both emerging and established, from across the UK. Since opening in 2010, New Diorama has welcomed well over 120,000 audience members and has developed productions that have toured both nationally and internationally.

New Diorama was the recipient of the 2013/14 Les Enfants Terribles Prize and David Byrne was awarded the OffWestEnd Award for Best Artistic Director in 2014. New Diorama was the Mayor of Camden’s Official Charity in 2012/13, the only non-government funded studio theatre to offer access performances throughout an entire season. It received the prestigious Peter Brook ‘Empty Space’ Award in 2016 as a ‘vital creative hub for established and emerging theatre companies’ and was named Best Fringe Theatre at the 2016 Stage Awards.

Where is the Corn Exchange Newbury?

Corn Exchange Newbury is a flagship arts centre for the South East and engages with over 130,000 people a year through its live events, extensive learning and participation work and free outdoor events. It presents a mixed programme of theatre, dance, comedy, music, film and family work in its 400 seat auditorium and 40 seat independent cinema.

Every year it produces its own in-house pantomime, which this year is written and directed by Plested and Brown, and it supports a range of artists and companies across all art-forms through commissioning and development opportunities, mentoring and production support.

The Corn Exchange Trust also manages 101 Outdoor Arts Creation Space – a specialist facility for the development of large-scale outdoor performances with rehearsal spaces, fabrication workshops and onsite accommodation – and The Base Greenham – a visual arts and crafts centre with a gallery, workshop space and studios for eight resident artists.