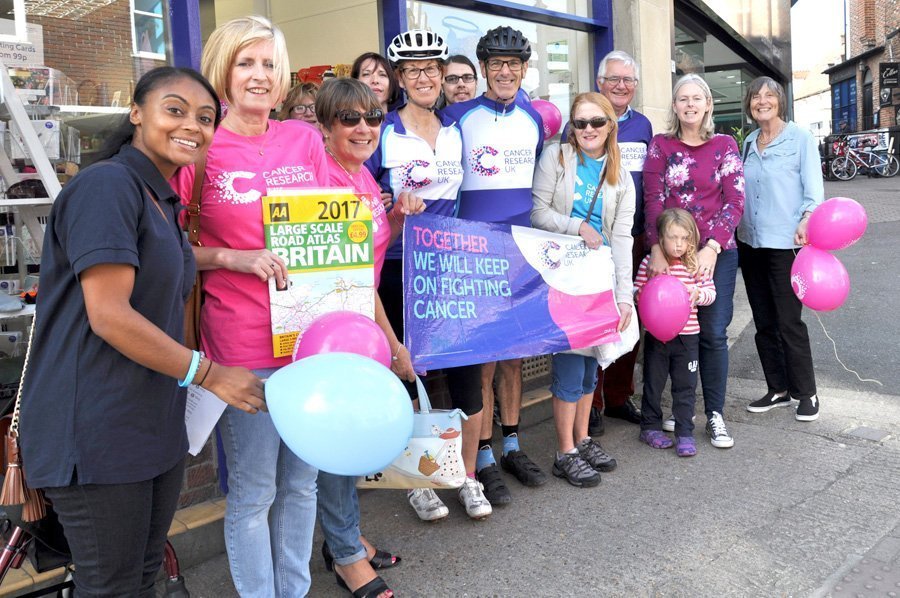 A couple brought together through tragedy have set off on an 850-mile cycle ride to help ‘beat cancer sooner’.

Sue Duncombe, 59, and Patrick McGuire, 62, set off from the Cancer Research UK shop in Wantage last week, cheered on by well-wishers.

Sue, from Childrey, near Wantage, and her husband decided to take on the challenge after both losing their partners to cancer.

The dedicated duo have now embarked on their latest fundraiser, where they will cycle around the country, visiting 101 Cancer Research UK sites.

The route will take Sue and Patrick across the country visiting charity shops and research centres, including Manchester, before returning to the Oxford Research Centre on August 17.

Speaking of the challenge, Sue said: “Not everyone can cycle 850 miles but everyone can recycle. We hope by doing this challenge we raise awareness of what everyone can do by supporting their local CRUK charity shop to beat cancer sooner.”

Sue, an award-winning fundraiser, has already raised more than £60,000 for the charity and is determined to add yet another great accomplishment to her list in memory of her late husband.

She was previously crowned Ambassador of the Year for the charity following the death of husband Philip, who died of prostate cancer aged 57 in 2009.

Her new husband Patrick McGuire, 62, lost his wife Pam to cancer 10 years ago.

Patrick, who celebrates his 63rd birthday while on the ride, added: “We are both feeling nervous trepidation but a lot of hard work has already gone in to this and with the support of everyone we are ready for it.”

The pair met through their fundraising work and after a whirlwind romance, they were married in December last year.

To find out more about the challenge, visit 101crukshopcycle.com or follow it on Twitter by using #101CRUKShopCycle.