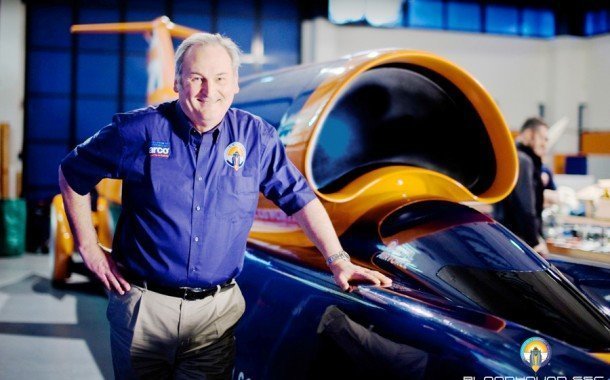 Oxfordshire’s links with science and engineering are now even stronger as the team behind the 1,000 miles per hour world land speed record attempt moved their headquarters to Didcot today.

The car itself is being constructed in Bristol but the head offices were moved to the college from Kingston Upon Thames in London.

“Even better, being at UTC Oxfordshire reinforces Bloodhound’s primary objective: to inspire the next generation of scientists and engineers.

“On behalf of the Bloodhound team I would like to thank UTC Oxfordshire and its team for the speed in which decisions were made. It promises to be a very fine relationship.”

UTC Oxfordshire will now act as the office for Mr Noble where he will direct the operation.

Testing of the jet engine and rocket propelled car is to take place in Cornwall early next year, and the team hope to break the current land speed record of 763mph next Summer.

Former Royal Air Force pilot Wing Commander Andy Green, who holds the current land speed record, will take the car to speeds of 800mph in 2016 and then hopes to take the car up to 1,000mph in 2017.

The setting for this historic world record attempt will be a 12-mile long track on the Hakskeen Pan in the Northern Cape, South Africa.

A team based in South Africa has hand-cleared more than 16,000 tonnes of stone over the last five years to prepare the track.

UTC Oxfordshire’s principal Owain Johns, said: “This new partnership means that our students will be rubbing shoulders with the team behind one of the most high-profile and exciting science and engineering challenges of our time.

“The ethos of Bloodhound is to break new ground in science and engineering while also inspiring the next generation of scientists and engineers.”

“We are looking forward to realising the educational benefits of this partnership for our students and for other young people in the community.”